The bottom of your toilet might be the least-regarded location in your home. Most of the time, you don’t think about the connection between the toilet and the sewer system. If there is a gap between the bottom of the toilet and the sewer pipe, you have a problem. If you are lucky, you noticed the problem when the commode was removed for some other reason. If you are unlucky, you saw leaking water around the base of the toilet. Either way, you might need a toilet flange extender to seal things up.

Why Do I Need a Toilet Flange Extender? 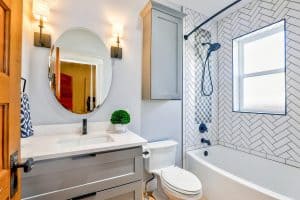 To understand why you need a toilet flange extender, you need to start with the way toilets work. A U-bend connects the water that’s in the bowl to a sewer pipe under the floor. The U-bend retains enough water to seal the pipe and keep sewer gases where they belong.

The toilet sits on top of the pipe but doesn’t generate pressure. The fitting between the drain and the sewer pipe isn’t screwed or glued in place. Instead, the toilet has a small lip around the edge of the drain. There is a pipe in the floor with a flange where the drain lip fits. The flange is a broad, flat area around the edge of the pipe that sits flush on the floor. To keep everything sealed up, a wax ring is placed on the flange when the toilet is put in place.

The lip of the drain pushes into the wax ring, causing the ring to spread. The lip-ring-flange combination forms a watertight seal that keeps all the liquid in the pipe. That is, it keeps everything in the pipe when all the parts fit together correctly. If the pieces don’t fit right, you get leaks.

How to Know When You Need a Flange Extender

There are two situations when you can think about a flange extender. The first is when the toilet has been removed for some reason, and you can check the flange height directly. The second occurs when there is a problem with the commode that tells you it needs to be removed and repaired.

When the Toilet Has Been Moved

When the Toilet Is in Place

Any of these symptoms is a sign that the toilet has a leaking flange which may need an extender.

Doubling Up the Wax Ring

Some people will advise you to use two wax rings instead of a flange extender. It’s cheaper and easier to stack the rings, but don’t do it. The top ring can shift when you install the toilet, causing a gap to appear. Even if the two rings seal up initially, the seal between the two is weak. It can eventually wear out-aggressive plunger use is particularly hard on stacked rings. Stacking rings is a recipe for a leak in the future – avoid it. 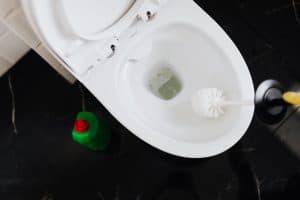 If you do need a flange extender, you have plenty of options. The top of the flange should be somewhere between flush with the surface of the floor to ¼ inch higher than the floor level. Measure the gap as described above to determine how tall your extender should be. This is crucial – you won’t be able to get a good seal with an extender that is too short, and the toilet will be unstable if the extender is too tall.

Plumbing parts can be tricky to fit, especially for older homes. If you think you need a toilet flange extender, set aside a reasonable amount of time for the repair. Start early to give yourself a full day to fix the problem. Plan on at least two trips to the store – one for removal/cleanup supplies, and one for repair supplies. If your toilet isn’t already removed, that’s the first step. Turn off the water, flush the toilet, and start removing it.

Pro tip: “toilet water solidifier gel” turns the little bit of water that remains in the U-bend into a gel that won’t spill. That saves you cleanup time.

Once the toilet is removed, you can check whether the flange is low or damaged and assess what the real problem is. Measure the height of the flange, check the flange and the base of the toilet for cracks, and make sure the wax ring was in good shape. Make a list of products you need to make the repair. Measure the size of the existing equipment because pipe diameters, toilet base screw spacing, and other items can vary. Make sure you know what’s needed before you spend money.

Adding a toilet flange extender isn’t a complicated or expensive process. If a low toilet flange is the cause of your problems, you can fix it with a little time and effort. If your existing flange is in good condition but lower than the floor, you need an extender. Installing one is easy. If you see water around the base of your toilet, give a flange extender a try today!