People may have heard the term “reverse osmosis” in passing reference to seawater treatment plants or saltwater aquariums. Still, very few people understand how this mechanical process actually works or the various ways it is used in day-to-day human activities. So what is reverse osmosis, and how does it work?

Reverse osmosis is a mechanical filtration process where water is passed through semi-permeable membranes that filter out ions along with most molecules and particles. Reverse osmosis results in water that is one of the purest forms of water on Earth, both pH neutral and free of trace minerals.

Reverse osmosis is used in both household and industrial applications. Keep reading to find out more about how reverse osmosis works and how you can use it to your advantage. 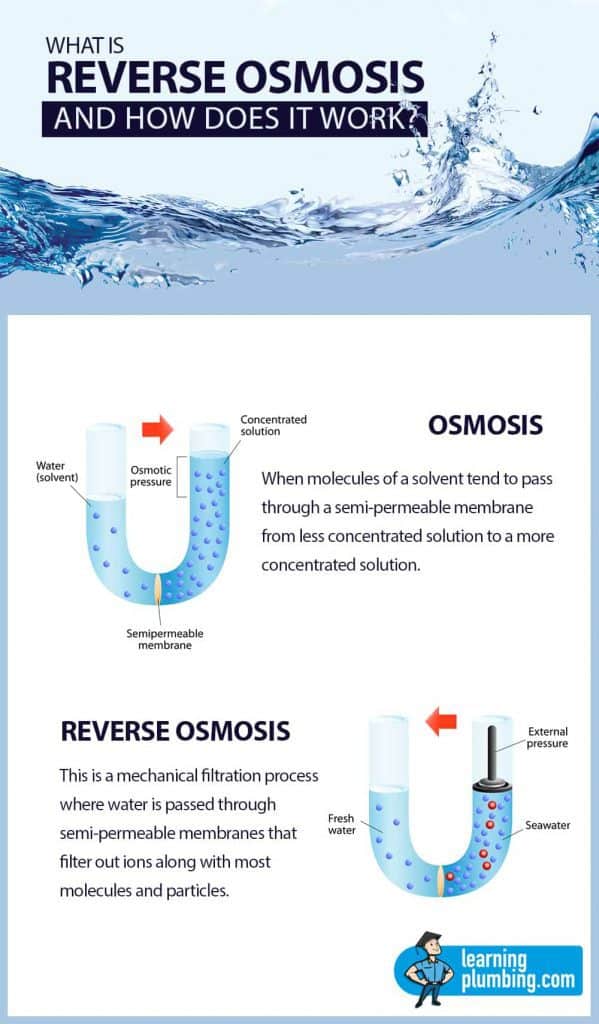 The discovery of the physical principle of osmosis goes back to Jean Antoine Nollet, a peasant who was educated with the clergy and who eventually became both a priest and a scientist of renown for his time. In 1748, he discovered the process of osmosis, which eventually led to the discovery of reverse osmosis.

This physical process wasn’t utilized in practical applications much for the next two centuries until it was used to filter water in a Thayer University student project by inventors Chris Miller and Dean Spatz. This experiment became the basis for a multimillion-dollar water filtration industry used in homes and water treatment plants.

This student experiment eventually went on to win government contracts from the Department of the Interior to develop reverse osmosis filtration systems. This, in turn, led to its applications from straining maple syrup at the industrial level to kidney dialysis.

Is Reverse Osmosis the Same as Water Softening?

Some people might accidentally confuse reverse osmosis water purification with water softening, but the two processes are not the same. Water softening is the process of filtering water to remove hard minerals that increase the water’s pH and make the water alkaline. This can have a negative effect on water’s ability to be used in cleaning and other applications.

Reverse osmosis does soften water to a neutral pH. Still, it goes beyond water softening filtration to filter out a much higher percentage of contaminants than those removed by water softeners.

While water softening might increase a water’s quality by making it easier to bathe with or positively affecting its flavor, it can’t stand up to the purification that reverse osmosis provides in comparison.

How Does Reverse Osmosis Work?

What Are Reverse Osmosis Membranes?

TFC membranes are made up of a very thin but dense barrier layer (0.2 millimeters) on top of a microporous polysulfone support layer. The benefits of TFC membranes for use in the process of reverse osmosis are as follows:

Without the reverse osmosis membrane, the process of reverse osmosis would not be able to purify water to nearly the level that materials technology currently allows it to.

What Chemicals Are Used to Clean Reverse Osmosis Membranes?

To function properly, the membranes in a reverse osmosis filtration system have to be periodically cleaned to remove any accumulated mineral scale or other debris. Here are some of the various contaminants that can build up on reverse osmosis membranes:

Alkaline cleaners are typically used to address biological materials that need to be cleared from the system, while acid solutions are used to clear away mineral deposits. Sediment filters and carbon filters should be replaced roughly every twelve months, while reverse osmosis membranes have an operational life of 2-3 years depending on workload and regular maintenance.

These stages are present in almost all reverse osmosis systems. But, some RO systems include a fifth stage of filtration, which involves adding harmless trace minerals back to the water once the real contaminants have been removed. This remineralization stage is to combat the argument against reverse osmosis removing vital trace minerals that people need for health purposes.

The purpose of this storage system is to hold water that is generated until it is ready to be used. Reverse osmosis systems accumulate water until the pressure reaches a certain level because reverse osmosis systems filter water relatively slowly compared to other less-intricate forms of water purification.

What Contaminants Does a Reverse Osmosis System Remove?

All of these parasites, bacteria, and viruses are capable of causing real damage to humans if ingested, especially those who are immune-suppressed, such as children or the elderly. Using a reverse osmosis system eliminates the threat of accidental exposure to a wide array of pollutants that would otherwise end up ingested by the person drinking the water.

What Contaminants Can’t Be Removed by Reverse Osmosis?

Whether it’s used at the home faucet or in a factory, reverse osmosis water has many useful life applications that affect several different industries. Without it, many of the technologies we depend on today would be much less efficient.

What Are the Benefits of a Reverse Osmosis Filtration System?

There are many benefits of reverse osmosis filtration that have been put to use throughout various human industries. But as it pertains to water, here are some of the advantages associated with reverse osmosis:

Reverse osmosis has been around as a mechanical concept since the mid-sixties. Still, it is just now coming to prominence as a twenty-first-century technology, with new applications for it being discovered all the time.

The Argument Against Reverse Osmosis

People make a few claims against reverse osmosis, although some of these arguments are based on misconceptions:

One of the arguments against reverse osmosis is that it puts off a lot of wasted water as a by-product of the filtration process. For example, one gallon of reverse osmosis water requires four gallons of water to produce. This means that overall, reverse osmosis is only 25% efficient with regards to water production.

This might sound wasteful out of context, but it needs to be quantified with a few sidebars. The first is that many other processes in running a household, from washing vegetables in a sink to drawing a bath, wastes water. And not just 75% of it, but every single gallon that is used.

This means that while reverse osmosis may seem wasteful if you look at its water efficiency statistic alone, it is still significantly less wasteful than most household water practices. And in doing so, it provides the added benefit of a purified source of drinking water in the bargain.

Unfortunately, while reverse osmosis does provide many human benefits, there are some areas where reverse osmosis can cause negative environmental impact, especially in its application in coastal desalination water treatment plants.

Here are some of the negative environmental impacts identified by the National Research Council in their 2008 analysis of reverse osmosis desalination plant operation:

While these negative environmental impacts are comparable to similar technologies being utilized, there is still concern about the long-term impact of desalination plants on the marine environment.

Luckily, several advances are being made in the operation of desalination plants to reduce their impacts on native habitats and environments.

Reverse osmosis has a somewhat checkered environmental reputation, but objectively it is no worse than other similar industrial practices regarding environmental impact. Future developments in reverse osmosis technology also have the potential to make the process more efficient and less dangerous for local wildlife populations.

While it is true that reverse osmosis removes all potential contaminants from water, leaving it as close to pure as humanly possible, the downside of this process is that there are many trace minerals stripped out of the water that is necessary for human health.

Tap water contains many trace minerals that modern people are not very consistent about getting in their diets, such as potassium, magnesium, and calcium. With reverse osmosis water, people are not only not getting these vital minerals from their food, but they’re also not getting them through their liquid intake, either.

This can lead to cumulative health problems related to dietary malnutrition, such as hypokalemia or hypocalcemia. To avoid complications due to trace mineral deficiency, people who use a reverse osmosis system for their water intake should be sure to either take a multivitamin or monitor their food intake to make sure that they get all of the vitamins they need to survive.

While most people might not realize the effect that reverse osmosis has on their daily life, most people are touched by the process in some way throughout the day, whether it’s when they take prescription medication that has been created using reverse osmosis purified water or they’re observing an aquarium maintained with it.

The process of water purification through reverse osmosis does pose some environmental challenges, but hopefully, as the technology advances, more reverse osmosis plants can be put into place to help remove dangerous contaminants from our drinking water.